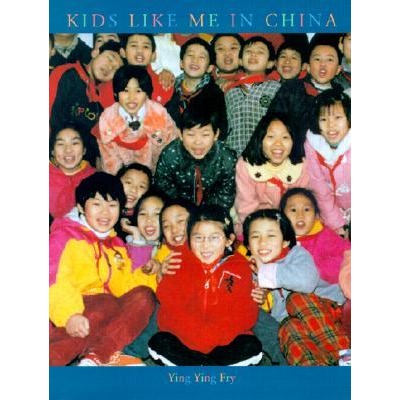 Kids Like Me in China is about an eight year old Chinese-American adoptee as she goes back to China for the second time. The text for the book was compiled from her journal entries, interviews, and video/audiotapes about this experience. During this trip, she spends two weeks at her orphanage, meeting other children and talking to the woman who was her nanny while she was there. She also meets some older school age children and has fun learning about similarities and differences in their lives.

In much adoption discourse, the adoptee voice is missing. Books are either written from the perspective of adoptive parents, social workers, or so-called adoption specialists. When adoptee voices are heard, it is often years afterwards, once the adoptee has become an adult. Kids Like Me in China is unique in that it is told from the perspective of a adopted child. Of the nearly forty children’s books specifically about adoption from China, Kids Like Me in China is the only one with a child author. As a result of this, some of the language is a little choppy, but the messages are completely understandable at a child’s level.

As Ying Ying tells the reader about herself, it is clear that her parents have made some very proactive decisions about keeping her involved in a Chinese-American adopted community. Their family lives in San Francisco, which is a large city with many adoptees. Also significant is that California has the largest Chinese-American population. Ying Ying even comments about how many of her friends have also been adopted from China. She also attends a Chinese school where she is learning to speak Mandarin. Though not at fluency level, her language skills are sufficient enough that she can communicate with the other children in China. Ying Ying also talks about going to China before with her parents and visiting orphanages. This time, however, she visits her own. Her parents have clearly made great efforts in trying to keep their daughter connected to China. This shows in Ying Ying’s confidence in her identity as a Chinese-American girl who feels comfortable in both countries.

It is also obvious that Ying Ying and her parents have talked about adoption in China in general and in specific to her story many times before. She knows a lot for a girl of her age and is able to tell other children through this book about China’s One Child Policy, “that girl thing” (social preference for boys), as well as some birthparents’ inability to care for severely handicapped children. When giving readers this factual narration, the information echos much of what Sara Dorow writes in the book, When You Were Born In China. However, Ying Ying’s personal anecdotes on the subjects differentiate her writing from Dorow’s.

A very valuable experience for Ying Ying is working in the baby room of the social welfare institute. There she sees how hard the nannies work to take care of the babies and to keep everything functioning. While many existing children’s books talk about all of the infants, not many discuss the older children in the orphanages or the young adults who have grown up entirely in an orphanage. Ying Ying has the opportunity to meet these people on her trip to China. She talks about how in this section of the orphanage, there are the same number of boys and girls. Ying Ying quickly becomes friends with the girls who are around her age, and the children tell Ying Ying about their daily schedules: going to school, coming back for lunch, doing their math homework, and eating snacks. When Ying Ying talks to the woman who grew up in the orphanage, she finds out that she is now employed as the laundress there. She sometimes looks after the older girls and has occasionally modeled.

After spending a few weeks at her orphanage, Ying Ying visits a friend at his house. They talk about their lives – both the similarities and the differences. She also notes how she looks like a part of his family. The most important thing that Ying Ying learned throughout this experience of visiting with these various Chinese children is that though there are differences, in many ways they are very similar and if she had stayed in China, her life wouldn’t have been better or worse, just different than it is now.

Many parts of the book have very raw thoughts and emotions where Ying Ying will say that she doesn’t know what to think of something or she explains how sometimes she just needs to leave the room to think. Her level of honesty in the book is outstanding and could definitely prompt some deeper level conversations between parents and children about adoption and their birth country.

There is very little mention of Ying Ying’s first family in this book. She says, “I wish I knew what my birth mother looks like. Does her face look like mine?” However, the point of the book is more of a focus on the children than the adults. All of the emphasis on the children in the orphanage, a demographic not talked about much in other books, makes up for the lack of attention given to the birth families in this story.

The book is actually fairly long for a children’s story. It’s 41 pages with some very text heavy ones. The writing is a little long sometimes, but perfect articulation of thoughts is not expected from an eight year old. A parent reading this with their child would have to make sure they have enough time to dedicate to reading the book and any discussions that came around as a result of the text.

This is a very honest story of a girl’s journey back to China as an adoptee. Because the story is told from the adoptee’s perspective, it would make it even easier for Chinese-American adoptees to relate to the story. The book has many wonderful messages and would be a fabulous addition to any adoption collection. I would strongly recommend this book to families with children from China.