“Growing up in the ocean, Kelp has always assumed that he was a narwhal like the rest of his family. Sure, he’s always been a little bit different—his tusk isn’t as long, he’s not as good of a swimmer, and he really doesn’t enjoy the cuisine. Then one night, an extra strong current sweeps Kelp to the surface, where he spots a mysterious creature that looks just like him! Kelp discovers that he and the creature are actually unicorns. The revelation leaves him torn: is he a land narwhal or a sea unicorn? But perhaps, if Kelp is clever, he may find a way to have the best of both worlds.” – Goodreads

From the first page to the last, the illustrations in this book are darling.

This book captures big and complicated emotions in very few words at an easy to grasp introductory level. Kelp knows he’s different from the other narwhals, and the author allows him to embrace feeling different without feeling ostracized.

When Kelp swims to shore, “Kelp felt a little bit anxious” because he had never left the ocean. He describes everything on land as “strange and beautiful — but also kind of scary.” Kelp’s nervousness about going to shore and exploring the land mirrors feelings many adoptees have about returning to their homeland for the first time and normalizes holding a range of emotions about that experience. 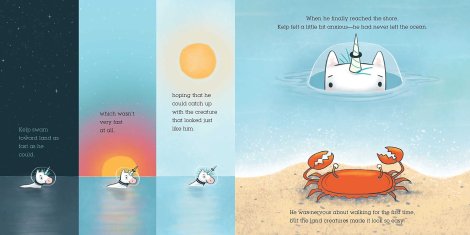 Kelp eventually finds a large community of unicorns who look just like him! The unicorns teach Kelp all about unicorn activities, foods, and culture. and welcome Kelp to their magical group. Despite how much fun Kelp has with the unicorns, he misses his narwhal friends, so he decides to return to them. This decision shows how integral the narwhal world and his home under the sea are to him and that he will always have a piece of him elsewhere.

When Kelp returns, he is nervous that the narwhals may not still accept him since he now knows his true identity as a unicorn. The narwhals greet him with smiles and a “Welcome Home” banner which reinforces to young readers that they can explore and take on an identity different from their family’s and they will still be loved and cherished.

Though Kelp was glad to be reunited with his narwhal friends, he missed the life he had experience with the unicorns on land. Sima asks, “Did he want to be a land narwhal with the unicorns… or a sea unicorn with the narwhals?” Through this, the author acknowledges that finding the community of unicorns changed Kelp’s identity forever. Now, wherever he goes he will have a longing for his other community. The phrasing of “land narwhal with unicorns” and “sea unicorn with narwhals” speaks to the fact that he will never fit in perfectly with either group, though both are his own.

Kelp feels anxiety over this monumental decision but eventually realizes that he doesn’t have to choose between them. The last spread shows an image of the the narwhals and unicorns playing together, blissfully combining their lives and worlds with young Kelp in the center. This is remarkable because it tells children that they don’t have to choose one part of their identity over another, and for adopted children the message is clear that it is okay and wonderful to hold love for both families. Of course, many reunion stories are more complicated because real life isn’t comprised of unicorns and narwhals, but what is depicted in the last pages is idyllic.

The book begins by saying that “Kelp was born deep in the ocean,” and nothing further is explained about this. Some precocious children might ask how this could happen or what happened to Kelp’s parents. In this way, the author erased the parents from the book, but I believe that was an unintentional error given how carefully and clearly Sima emphasizes the importance of both worlds for Kelp.

Kelp gets swept away by a strong current. It is not uncommon for children to get lost or separated from their parents at some point, but the idea of being swept away by a current might be particularly distressing to adopted children who have experienced a permanent separation from their first families. Parents should know their individual child and how she/he will respond to this.

Kelp had never heard of unicorns before, and it is later revealed that the narwhals knew all along that he was a unicorn without telling him. The narwhals should not have neglected this identity for Kelp during his early years, which contributed to his confusion when he thought he was a misfit narwhal. This lack of explanation is in vain with the misconception that many adoptees don’t find out until later in life that they are adopted, leading questioning minds to ask adoptees, “How did you find out you were adopted?” In reality, most of us know from the very beginning, and those who are transracially adopted just have to look in the mirror to know we were not born into our families.

Though there are a couple of faults, the benefits greatly outweigh these and merit giving this book a read. Not Quite Narwhal respects a range of emotions and validates them all. What is most profound to me is the concluding message that children do not need to choose between families or cultures. Not Quite Narwhal is a beautiful book that could be a great tool in starting early discussions around adoption. I would highly recommend this book to adoptive parents of young children.

And though the focus of this review is for the benefit of adoption literature, the author of the book has left it open enough that Kelp can relate to any child living with loss and longing for love from both first and adoptive families, for a child navigating two households due to divorce, a child moving to a different school who wishes to keep old friends and make new ones, and many other situations of feeling torn.

4 responses to “Not Quite Narwhal (Review)”