While scrolling through my newsfeed on Facebook today, I saw a post by Second Chance Adoptions shared in a group of which I am a member. The post was advertising the rehoming of a little girl adopted from China who has been in the United States for less than two months. 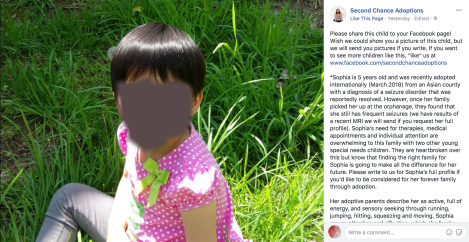 Starting with the very first sentence, this post makes me so angry. Children are not a commodity that can just be discarded, and the wording that this living girl is an “Asian baby doll” perpetuates the infantilization and commodification of adoptees.

In the Parents for Ethical Adoption Reform Facebook group, several members reported seeing posts from the couple who adopted this girl, saying they no longer wanted her once they found out that her medical issues had not been resolved, but they were encouraged to finalize the adoption and disrupt once they were back in the United States. This means that the couple left China with this girl, never intending to raise her.

She has been with this couple (I will not use the word her “family”) less than one month, and they are choosing to rehome her, citing that her needs, therapies, and individual attention are overwhelming. She has been home ONE MONTH! Not only does she have medical complications, she is newly traumatized having to get used to a new country, new people, new sounds and smells and everything around her. Adoptive parents sign up to handle a child’s traumas when they choose to adopt. Moreover, people give up control when they have children – through birth or adoption, not knowing what needs, personalities, and love might come their way. If the couple had conceived a child biologically who had special needs, chances are they would not have placed that child for adoption. But because this girl was adopted – special ordered – and the “product” they received was not what they had imagined, she can be disposed of easily.

The post asks people to “please write if you’d like to be considered for her forever family through adoption.” What does “forever family” mean to a little girl who has a family in China, who likely relinquished her because they couldn’t afford her medical treatments – to a girl who had a second set of people adopt her and promise to be her “forever family,” to love her as their own, to care for her through adulthood, and then less than a month of being together relinquish her. To this little girl, why would a third set of caregivers become “forever family?”

The people she is currently living with will consider Evangelical Christians who are committed to teaching her about the love of Christ as her next potential adoptive parents. Perhaps they should be more concerned with finding a loving home for her who will actually keep her, which their “personal relationship with Jesus” couldn’t even do for her.

*** Edit: The Second Chance Adoptions page removed the wording where they called the girl a “little Asian baby doll,” which is perhaps the only positive movement in this story. The administrators of the Second Chance Adoptions Facebook page have, however, been promptly removing critical comments on their post, silencing the voices of adoptees and those who oppose adoption disruption, which effectively negates the initial step forward.

22 responses to “Disrupted Adoption of 5-Year-Old”

There was an error retrieving images from Instagram. An attempt will be remade in a few minutes.