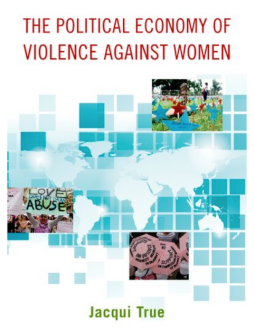 Gender based violence is the leading cause of death of women from the ages of 19 through 44.[1] Nowhere in the world do women share equal social and economic rights with men or have the same access as men to productive resources.[2] Those statistics are devastating to read, and recent changes in globalization have further marginalized women, increasing the number of female migrant workers, refugees, and trafficking victims. These positions all make women more susceptible to sexual violence. By questioning the causes, prevalence, and solutions to gender based violence, Jacqui True writes an engaging, easily understandable, and highly informative book. She argues that a feminist political economy approach is necessary when looking at local and global policies and programs responding to violence against women to effect the most productive change.

One of the most effective techniques True uses to ground her main argument and supporting arguments throughout the book is highlighting specific case studies. From showcasing examples of sexual violence in Argentina, Thailand, Rwanda, and Iceland, sexual violence can be blatantly seen as a global phenomenon. These individual case studies break up statistic-heavy data nicely and provide interesting, concrete examples of conceptual points addressed by True. For example, on page 79, the focus on violence against in the Russian Federation during the post soviet transition contextualizes the gender relationship to markets and political turnover. This technique also plays to readers’ human sides, focusing on people and situations, and fostering a sense of empathy and social urgency.

Additionally, True’s use of repetition emphasizes her main argument. The thesis statement is articulated clearly in the first introductory chapter of the book, as well as in the conclusions of every succeeding chapter. The reiteration of the thesis, that violence against women is connected to broader global structures of power, makes her argument undeniably clear and accessible to readers with limited knowledge of gender based violence.

The most important method used in this book, however, is the political economy approach to analyzing the troubling patterns of violence. This is a relatively new framework through which to understand gender based violence, broadening the explanations and possible solutions. The political economy approach draws direct connections between the economic, social, and political. By using this method, True shows how globalized economic power and structures reinforce gender inequalities, making women more susceptible to violence.[3]

Along with these methods, there are several key concepts critical to the understanding of the causes of and potential solutions to violence against women. Hence, the first key concept is violence against women. The most commonly used definition provided by the United Nations is: “any act of gender-based violence that results in, or is likely to result in, physical, sexual or psychological harm or suffering to women, including threats of such acts, coercion or arbitrary deprivation of liberty, whether occurring in the public or in private life.”[4] This is a systemic discrimination and a violation of human rights. This book shows multiple forms of violence against women whether that be as a weapon of war, trafficking, domestic/intimate partner violence, and exploitation and women’s lack of economic and social rights. It is an imperative field of study, as violence against women is increasing worldwide, yet in many cases, is preventable.

Understanding multiple forms of masculinity is another key concept to situating violence against women in a global context. True discusses “transnational business masculinities” which is associated with autonomy, capital, and control; “breadwinner masculinities,” traditionally assuming control over income, resources, and women; “soldiering masculinities,” typically praised as a protector of the state and women; and “disaster masculinities,” created through strong men doing hard physical labor in harsh conditions. Though tied to different circumstances, all of these masculinities have power over women in common, promoting an acceptance of violence against them. When men felt their masculinity was challenged because they were unable to financially support their families or unable to protect their families during war, violence against women increased. The political economy approach suggests that masculine identities are economically constructed, and therefore can be changed. In order to do so, nonviolent, caring masculinities need to be praised and gender stereotypes must be resisted. Moreover, men need to see violence against women as a men’s issue and advocate an end to the practice, as well.

The last key concept I will discuss is globalization. As ideas, people, and material goods travel around the world faster, there has been an increased demand for women’s cheap labor. Migrant workers are often exploited, paid poorly, and placed in illegal or unregulated employment.[5] Since globalization, human trafficking has also increased, and females are often the prime targets for traffickers.[6] State laws are not supportive of these migrants, though, oftentimes connecting their immigrant status with abusive spouses or bosses, or characterizing the migrant as “the other,” making it easier to deny them equal labor rights.[7] Globalization and migration do have benefits for women escaping unhappy marriages, financially supporting their families, or escaping social pressures to marry. Thus, globalization cannot be seen in a purely negative light, but state’s refusal to see trafficking as an inseparable issue from migration and unawareness of the development and gendered inequalities involved allows trafficking to flourish and women to continue to be in especially vulnerable situations. The answer is not restricting women and girls’ mobility, but rather to do it in a way that guarantees them safety and dignity.[8]

While True does an exemplary job of discussing this broad topic, there were a couple of places of confusion for me. One question I had for almost the entire book was how to make sense of the contradicting idea that economic empowerment of women is key to ending violence against women contrasted with the point made in chapter 3, that violence against women may actually rise as women assume nontraditional roles and gain greater access to these socioeconomic opportunities and resources.[9] This paradox was finally addressed in the conclusion of the book with True’s argument that economic opportunities are crucial for women but must not come at the expense of human rights.

Additionally, I was surprised to learn that a study in the Congo showed that women self-reported committing 41% of sexual violence against other women and 10% against men.[10] I wonder if females were more likely to report or what connections to constructed masculinities influenced the statistic. This, for example, is a case where True brings up an interesting point and moves on quickly, leaving me with unanswered questions. I understand that gender based violence is a huge topic. True acknowledges that each chapter of The Political Economy of Violence Against Women could be lengthened to its own book entirely, but a little more analysis of new points, like this, would have helped.

Despite these couple critiques, I would highly recommend this book to peer-scholars interested in better understanding the scope, nature, and causes of violence against women. I especially appreciated the book’s uplifting end, concluding with a call to action. Towards the end of the book, I was particularly struck by idea that “there is no such thing as a natural or inevitable disaster.”[11] The hurricanes, tsunamis, and earthquakes mentioned all had varying outcomes dependent on the political precautions, economic resources, and social conditions. Likewise, throughout the book, True instills in the reader the idea that gender based violence is not inevitable, but a result of the political, economic and social factors. After reading this book, I have a heightened awareness on violence against women as well as a heightened hopefulness that we can work with the social, cultural, and economic norms that allow gender based violence to continue. In the first chapter, True expresses that “[her] greatest wish is that this book will inspire important and ongoing work,” and I have no doubt that it will.

4 responses to “The Political Economy of Violence Against Women (Review)”