If you agreed at all with my last blog post (To Girls, From Consumer Culture: White is Beautiful) on the disconcerting effects of the lack of diversity in our children’s toys, namely dolls, join us to tell American Girl® that we want them to commit to creating another Asian American doll. This petition from 18MillionRising takes just ten seconds to complete, and its message is so important to me.

We Want an Asian Doll Petition

Though commonly perceived as “fresh off the boat,” Asian Americans have a long history in the U.S., starting in the mid-1800s. Chinese-Americans’ work on the transcontinental railroad greatly shaped this country’s systems of travel. In the late 1800’s, many white people didn’t want to live or work alongside Chinese people, and so these immigrants were ghettoized into the Chinatowns. Chinatowns served as a temporary sanctuary from racism and hostility. In the late 1800’s to early 1900’s both the Chinese Exclusion Act of 1882 and the Immigration Act of 1924 (Asian Exclusion Act) were in place. After the bombing of Pearl Harbor, President Franklin D. Roosevelt signed Executive Order 9066 on February 19, uprooting 100,000 people of Japanese birth or descent on the west coast to be sent to Internment camps. In 1980, however, Congress created Commission on Wartime Relocation and Internment of Civilians to investigate internment of Japanese Americans; in 1983 it reports Japanese American internment was not a national security necessity. In 1982, Vincent Chin was brutally murdered in Highland Park, Michigan. Though tragic, this hate crime rallied Asian Americans together and has been credited with starting a pan-ethnic Asian American movement.  By removing the only Asian American doll, American Girl has erased our history in this country from their line of products. 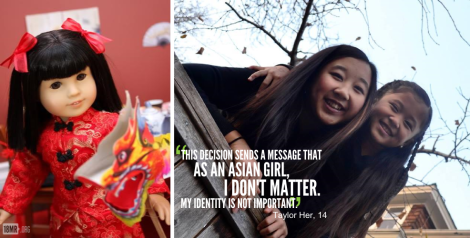 We Want an Asian Doll Petition

6 responses to “AMERICAN GIRL®: WE WANT AN ASIAN DOLL”