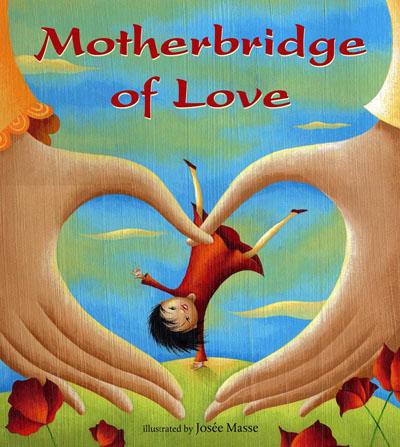 This book is a short poem, explaining to adopted children that they have two important women who have shaped their lives – both the birthmother and the adoptive mother.

The cover illustration is a beautiful image of two hands surrounding a child, forming a heart shape. When looking again at the picture, one can see that the hands come from two different sources, wearing two different sleeves. This symbolizes the biological and adoptive mothers’ joint love for the child. However, a confusing element to this picture is that all three characters represented have the same skin color. When dealing with transracial adoption, this is simply not a reality.

The book paints a very positive image of children staying connected to China through clothing, activities, and travel. Illustrations in the book depict the little girl and her adoptive mother both wearing traditional Chinese clothing in one scene and flying a Chinese kite in another. This shows that the mother not only wants her daughter to be proud of her Chinese roots, but that she, herself, has also embraced the culture. This is important because so much of what children value is what is displayed to them by their parents. Additionally, the mother says, “This place or your birth place – which are you a daughter of? Both of them, my darling.” In doing this, the mother acknowledges the two different cultures that have predominantly influenced her child, just as she acknowledged that both her birthmother and adoptive mother have shaped the girl her daughter is becoming. This is very in line with the organization Mothers‘ Bridge of Love’s mission statement of building a bridge between China and the rest of the world, between the rich and poor, and between birth culture and adoptive cultures.

A very positive line in this book is, “And now you ask, of course you do, the questions others ask me too.” This normalizes the girl’s questions, making it clear that the adoptive mother is aware that she will have questions about adoption and her identity. It also expresses the point that other people will raise questions about the structure of families with transnational or transracial adoption.

Moreover, the birthmother’s placement in this book is very unique because she is represented on almost each page. This symbolizes her constant presence in the daughter’s life, even if she is unable to physically be there. A 2008 volume of Publisher’s Weekly said, “It’s a risky artistic choice, but Masse pulls it off in an understated way that offers comfort and encouragement to parents and children.” On the first page the biological mother is depicted as working in a rice field and on another page she is shown, pregnant and looking down at her belly. However on many of the spreads her spirit is shown, manifested through other inanimate objects. One page describes the birthmother as the child’s “guiding star” with an image of the daughter swinging from the star into the arms of her adoptive mother. The birthmother’s Asian features are also in the moon’s face, as the girl’s adoptive mother tucks her in at night, as well as in the mountain that the daughter and her adoptive mother stroll on. On the last spread, the birthmother’s face is shown in the sky with the blowing leaves, giving the sense that the birthmother’s spirit surrounds the daughter, even as she sits next to her adoptive mother. This final image is particularly interesting, and individual readers will have to decide if it would be eerie or soothing for their children.

Illustrations are extremely critical in children’s books when so much of what they absorb lie in the pictures that they can visually see. Though the illustrations have been highlighted in the “Praise” section of this review, it is worth mentioning that the features the illustrator gives the Chinese characters are a bit exaggerated. The eyes of the daughter are uncomfortably slanted in some pictures and in others are so narrow, the eyes appear to be only two thin lines on the girl’s face.

The first line of the book/poem is “Once there were two women who never knew each other. One you do not know. The other you call Mother.” The book goes on to describe the first woman who is the girl’s “guiding star” and “gave [her] life”, but never calls her a mother, as well. Through illustrations depicting pregnancy and infancy with the first woman, it is clear that she is the girl’s biological mother. By saying, “the other you call mother,” implies that the child should not call her biological mother a mother, as well. The book only refers to her as one of “two women” when she is certainly more than that. The premise of the entire poem/book is telling the daughter the importance of her birthmother, so why not call her exactly what she is?

The adoptive mother tells her daughter that she “prayed for a child, her hopes were not denied.” This line is trying to express how much the adoptive mother wanted a child, but in doing so it neglects the feelings of the biological mother. What about her prayers of either being able to keep her child or not being wrapped up in a societal situation that forces her to need a son? By having the adoptive mother’s prayers “not denied,” it prioritizes her desires above all else when the emphasis should be what is best for the child.

An uncomfortable line in the book when describing the biological and adoptive mother is, “the first gave you a need for love, the second was there to give it.” This connotes the idea that the first mother did not love the daughter, which contradicts the author’s entire point of writing the book. Throughout the whole book, the images of the biological mother looking down lovingly at her pregnant stomach or infant and the spirit keeping watch over the daughter show the readers that the birthmother did in fact love the daughter. Saying “the first loved you in a special way, the second shows you every day” could perhaps fix this issue and keep the book cohesive in the message it presents to its young readers.

On the final page, the adoptive mother tells her child that she is a daughter of “two different kinds of love.” I think, instead, the stress should be that it is the same love, a mother’s love, that drives both of their actions. Different circumstances shaped how the two mothers were able to express it, but it is obvious that both want the girl to be safe, happy, successful, and loved.

The last piece of criticism is that in this book, there is no mention of fathers, either biological or adoptive. This is a common problem in adoption literature that should be addressed because fathers play a key role in their children’s lives.

The birthmother’s active role in this book is a very unique and beneficial characteristic. Along with the positive messages of keeping culturally connected and asking questions about identity through open dialogue, the book also carries some contradicting ideas about motherhood and love. However, these statements are small and are able to be patched up with some additional conversation after a reading of this book. I think the overarching message of the book is a desirable one, and so I could recommend this book to families with children adopted from China on the condition that they would be able to see the drawbacks and be articulate enough to clarify the points of uncertainty.

8 responses to “Motherbridge of Love (Review)”